The stockbroker Manuel Vicens in 1883 commissioned the young Antonio Gaudi, recently qualified, to build his summer residence. The young artist left his hallmarks both inside and outside the building, inaugurated five years later, and later becoming known as one of the first buildings that shaped Catalán modernism.

The Casa Vicens is, therefore, the first of Gaudi's masterworks, and the first building on which the architect imprinted his neo-mudejar style, with inspiration from the natural world which characterised his work throughout his life.

The main entrance of Casa Vicens is characterised by its white and green ceramic, and its tiled surface. It's made up of four floors, and originally boasted both an archway and a waterfall, but the most characteristic elements which can still be seen today are the towers and chimneys, a reminder of that other great Spanish architectural wonder: the Alhambra in Granada.

Inside, the ceilings are decorated with a multicoloured ceiling, in line with the Arabic style which characterises the building, and the smoking lounge, the most impressive room in the entire house.

The Casa Vicens was declared a UNESCO World Heritage Site in 2005.

Casa Vicens has been open to the public from 2017. If you want to visit Gaudi's masterwork without waiting in line, we recommend that you buy the ticket ahead of time from our website with the added bonus that you can skip the line, saving you time! 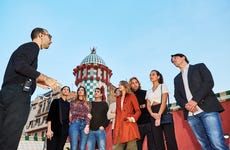