It was built on Mount Tibidabo and designed by the renowned architect Norman Foster. The centre is a large tower that stands 945 Ft (288 m) tall, making it the highest structure in the city with 13 floors.

The Torre de Collserola is the most important telecommunications company in Barcelona, transmitting 100% of the city’s television channels and 95% of its broadcasting radios.

The tower has an observation deck on the tenth floor that offers spectacular panoramic views of the city and its surroundings. If it is a very clear day, you can see the city up to 70 km away.

After climbing up in the fast-panoramic elevator, you will get to a 360° observation deck that stands 115 meters tall. The deck contains several screens with information on where the city’s main attractions are, so that you can easily spot them.

Although the Torre de Collserola offers fantastic 360° views of Barcelona, the observation deck is covered and moreover, the “Torre” is not very accessible. If you would like to see Barcelona from above, we recommend other viewpoints on Mount Tibidabo, such as the Talaia Tower (Tibidabo Amusement Park) or the observation deck at the top of the Temple of the Sacred Heart of Jesus. 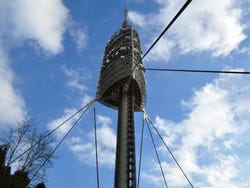 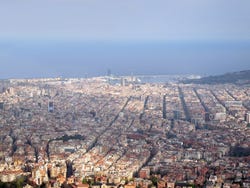 It varies depending on the dates. Generally, it opens from noon until 5 pm or 8 pm.

Funicular + bus 111.
By foot from the Tibidabo