The climate of Barcelona is Mediterranean, with hot summers and mild winters. It is common for it to rain all year round, but it is usually light rain.

Winters in the capital of Catalonia are mild with average temperatures of maximum 55,4°F (13°C) or 59°F (15°C) and minimums of 40°F (4,5°C). During September and October, it is common for there to be several days of heavy precipitations due to the Gota Fría phenomenon, a sudden fall in temperatures that causes strong rain or hail and which occurs only in the Mediterranean. It can leave up to 80 litres per square meters in just a few hours.

When is the best time to visit Barcelona?

Barcelona is a city that can be visited all year round, since winters are not very cold and summers are not excessively hot. If you wish to enjoy a few days sunbathing on one of Barcelona’s beaches during your holiday, the weather is best between May and the end of July, since it should be hot enough to relax on the beach but not too hot like in August. 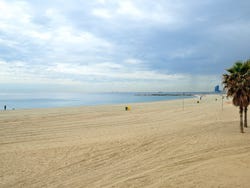