The structure consists of an enormous Corinthian style column on which stands a statue of Columbus. At the bottom part of the pillar are various sculptures related to the discovery of America accompanied by eight iron lions. These are normally sat on by the tourists.

In 1881, the city of Barcelona decided to commemorate Christopher Columbus, since the explorer had chosen the port of Barcelona to disembark after his voyage to the Americas. The monument was inaugurated in 1888 coinciding with the 1888 Barcelona Universal Exposition.

The Mirador de Colom is an impressive monument, but the views from its observation deck leave a lot to be desired. The top part is very small and visitors are squeezed into a miniscule space with small glass windows from which it is difficult to see, making it quite disappointing. 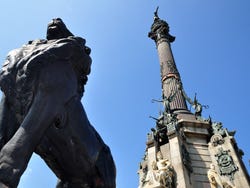 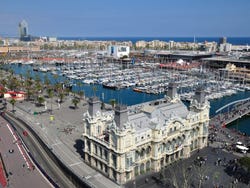