With over 52 million passengers anually, Barcelona Airport is the second busiest airport in Spain after Madrid Barajas Airport. El Prat has two terminals: T1, which is very modern and was inaugurated in 2009 and T2, which includes the old A, B and C terminals.

How to get from the Airport to the city centre?

The most comfortable and hassle-free way of getting from the Airport to the city centre is by booking a private airport transfer service. The chauffeur will be waiting for you at the arrival terminal with a sign with your name on it.

The approximate price is € 44 (US$ 46.30) for a 4-seater vehicle. By booking an Airport transfer service you’ll avoid language barriers.

Aerobús is a bus company that connects El Prat Airport with the city center. The journey takes approximately 35 minutes.

Aerobús has two separate lines that connect the Airport’s two terminals with Plaça de Catalunya. The bus stops at other locations in the city: Plaça de la Universitat, Gran Vía-Borrell, and Plaça d’Espanya.

The lines that circulate through Terminal 1 and 2 have a frequency of 10 to 20 minutes, depending on the time of day. Buses operate 24 hours a day.

You can buy your Aerobús ticket either online, in the specific vending machines at the Airport or directly from the bus driver.

Although this is the slowest option, the urban buses are the cheapest option to get to the city center from the Airport. During the day, the bus is number 46. After 11 pm, you can take the N17.

Note that if you take the bus from Plaça de Catalunya to the Airport, it stops in numerous occasions and the journey can take up to an hour, although the normal duration is between 30 and 50 minutes. The bus nº 46 leaves approximately every 20 minutes.

If you land or depart from Terminal 2, you can catch the L2 train that connects the Airport to the city center. The train departs from Terminal 2 and stops at Passeig de Gràcia or Barcelona Sants Railway Station every 30 minutes. The first train departs at 5:40 am and the last departs at 11:25 pm.  The journey to Passeig de Gràcia takes approximately 25 minutes, stopping along the way.

If you wish to take the train but you land in Terminal 1, there is a free bus that connects both terminals.

Although it's the most expensive option, a taxi is also an easy and pleasant way to get to your hotel, especially if you're traveling with your family or a group of friends and have quite a lot of suitcases. 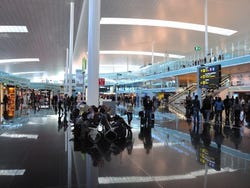 Getting to Barcelona Transport