Torre Glories is one of the tallest and most emblematic skyscrapers of Barcelona. This flamboyant building is situated in the new technological district of the city, and has become an important element in the city’s urban landscape, especially when it's lit up at night.It is located on Avda Diagonal with Calle Badajoz.

The construction, which is shaped like a bullet, used 25,000 m³ of concrete and 125 tonnes of steel. The Torre Glories measures 538,195 square feet (50,000 square meters) and most of its floors house business offices.

The tower is especially famous for its light architecture. The building has over 4,500 lights that illuminate the whole structure with attractive lighting as soon as the sun sets.

Although the construction of the “Torre” was very controversial when it was first built, it has become one of the cultural and tourist icons in Barcelona and the tours of the city normally include a visit to the striking building.

The Torre Glories is a noteworthy part of Barcelona’s skyline which can be seen from various parts of the city. In our opinion, the best time to visit the skyscraper is when the night falls, when the glass and steel dome is beautifully lit up. 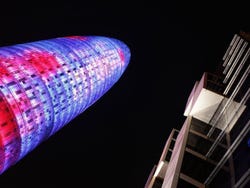 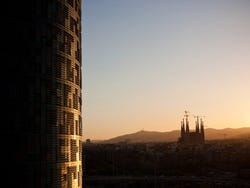