On this night tour of Barcelona you'll discover the stories and legends which the Catalan city hides in its oldest streets. Ready to uncover some mysteries? 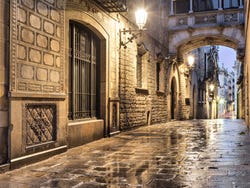 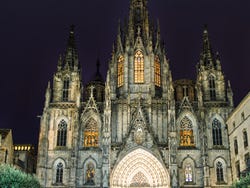 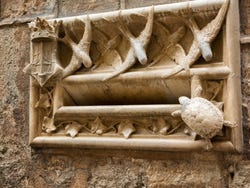 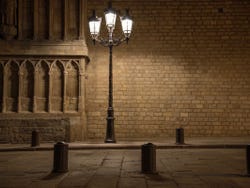 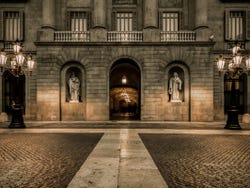 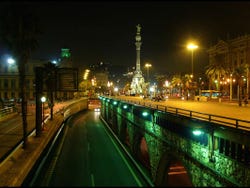 Our tour of the mysteries and legends of Barcelona begins on the junction of streets Fontanella and Estruc. On the latter, lived a special wizard and astrologer, as well as being known as the street where the "escurçonera" was sold: a stone which supposedly cured various illnesses. Who was the wizard of Estruc? What exactly was the 'miracle stone' made of? We'll reveal the answers to these riddles on our tour of this spooky area of Barcelona, just around the corner from Plaza de Cataluña.

Our night tour then continues, making its way into the Gothic quarter, where we'll learn of the story of the Santa Eulalia underground river, whose origins stretch back to Roman Barcelona. Then we'll seamlessly head over to the Archdeacon's House - the outside of which bears a strange stone tortoise. This highly symbolic figure providing the inspiration for another fascinating legend...

Next to the Archdeacon's House is the Barcelona Cathedral, where we'll pay special attention to its gargoyles, each one having an incredible history behind it, which of course we'll reveal on our tour. Then with our heads bursting with mysteries and ghosts around every corner, we'll end the tour back where it began.

If you would like you can also take a private tour of Barcelona. In this case, you will be part of a small group where you can take the tour into the corners of the city which interest you most, accompanied by a guide and nobody other than your partner, family, or friends.

Tours or activities will not consist of more than 20 people per group.

Alcoholic drinks are not available.

The activity takes place with a guide that speaks in English.

English speaking guide, expert in the legends of Barcelona

You can book up until 18 hours before the activity as long as there are still places. Book now to guarantee your spot.

On the corner of Fontanella and Estruc streets

This visit has been an amazing experience. The impressive knowledge from the guide eill let you speechless. Was extraordinary been able to recreate hidding parts of the city really have fun. She is amazing, will make you laugh, and you will discover a Barcelona that comes alive from the past in a different way.....totally recommend.

Mr Manuel is a person uwu he is passionate about what he does and makes the Tour very enjoyable, a great professional I recommend him 100℅ Opinion translated. Show original.

Great it is wonderful to listen to Manel is a great historian. We loved it Opinion translated. Show original.

I travelled with teenagers
Show all the reviews
like