Embark on a guided tour of Girona, discovering its most emblematic landmarks and exploring filming locations from Game of Thrones, following the footsteps of the Lannisters and the Starks. 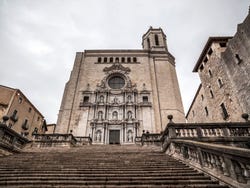 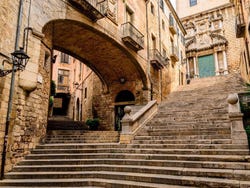 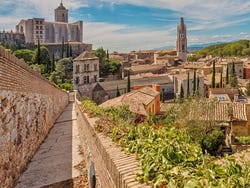 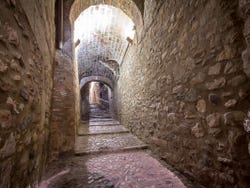 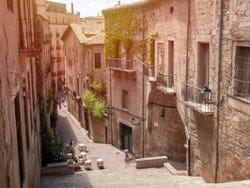 Start your excursion by boarding a comfortable air-conditioned coach at 8 am from Barcelona’s Estación del Nord. Head to the historic city of Girona, in the northeast of Catalonia, and get ready to explore the numerous filming locations of the sixth season of Game of Thrones.

Upon arrival, you’ll be led through Girona’s picturesque Old Town (Barri Vell) by a professional English-speaking guide. Discover this two-thousand-year-old town by visiting landmarks like La Força Vella, established by the Romans in the first century B.C. The stairs leading to the Cathedral and its baroque façade were transformed into the Great Sept of Baelor, setting of numerous scenes in the Game of Thrones’ sixth season. Next, explore the Medieval Quarter, constructed between the eleventh and fifteenth century.

And as we explore, we'll find ourselves in front of the Church of Sant Feliu and the Monastery of Sant Pere de Galligants, taken as the library of Antigua in the series. Girona is also home to Call, one of the best preserved Jewish Quarters in Europe, with its typical narrow streets that resemble a labyrinth.

Once you’ve recognized the various parts of the city that have been shot in the Game of Thrones, you’ll have time to continue exploring one of Catalonia’s most beautiful cities at your own pace.

Then you'll climb back on the coach and head back to Barcelona, where you’ll be dropped off at around 2 pm.

This guided tour takes place where a number of Game of Thrones scenes were filmed, however your guide is an expert in the history of Girona, not necessarily the hit TV series. The tour will be focused on the real stories behind the iconic filming locations.

* The price increases on the 30 March

The temperature and wellness of all those taking part in the service will be monitored daily, excluding and maintaining in quarantine any who display fever or symptoms.

The temperature of all attendees will be taken, and admission will be denied to those with a temperature of more than 37 degrees Celsius (99 Fahrenheit), and a full refund applied.

20% discount on the official ticket price.

US$ 63.60
US$ 50.90
No hidden fees or surcharges
Free cancellation up to 24 hours before the service starts
Book

Very good tour and information given by our tour guide. Got to see the wonderful city of Girona and see a few spots where they filmed GOT. I would recommend.

Drive was approx 1.5 hrs. Tour 1 hour and free time 1 hour. There is the odd place closed, monday. 1 h to see something is for example enough to see the basilica or church or eat; if you have time consider a longer tour. Split english and spanish groups was good; english guide was good. City is neat for game of thrones filming, which spent a good amount of time with this tour; photos to show around could be printed better. Enjoyed the quick tour.

I travelled by myself
8

The tour was very interesting and Alex, our guide, was friendly and knowledgeable. Everything was well-organized and the bus very comfortable.

Girona is beautiful and our guide Marta was fantastic. However, the tour is not really a half day. Much time is spent on or the bus. The tour should be extended to allow at least 2.5 hours free time. Much of the “on your own” time was spent heading back to the bus. Girona deserves more time and attention. It is a beautiful city.

I travelled by myself
Show all the reviews
like

9.60 / 10 399 reviews
Our free tour of Barcelona is ideal to start exploring the city. We'll tour the historic centre of Barcelona to discover all its mysteries. Plus, it's FREE!
Free!
Book
like

9 / 10 459 reviews
Visiting Barcelona's most iconic landmark is an unmissable experience. Discover Gaudí's masterpiece with fast track tickets!
US$ 34.70
Book
like

9.50 / 10 28 reviews
Visit the renowned Monserrat Monastery and take a funicular to the mountain’s Natural Park, followed by a hike to the top of the mountain with an expert guide.
US$ 81
Book